So lists and leads are a simple concept.

Agents need to log into a “campaign”, campaigns can dial multiple lists. For outbound dialling, your campaigns are generally used to split up which group of lists/leads agents dial.

Another use maybe you may have a “Web Leads” campaign where you assign your web leads lists, and the agents you want to dial those web leads log into this campaign. And you may have a separate campaign for “Cheap Leads” where you put your agents who are just training on there to call the cheap leads.

So basically, campaigns are a way of segmenting which lists/leads are called. Reports can also be ran per campaign, so there is several reasons why you would run multiple campaigns.

Now for the tricky one.

When you have rang a list of customers/leads, and then look at the list, you will see all leads within the list have a customer status. Some of the customer statuses are assigned automatically by the dialler, such as No Answer or Answering Machine. But some are assigned by the agent.

Here you can see there is 5 leads in this list, they are all in the “Called” column so they have been called, and 2 are Answering Machines and 1 No Answer, these have been assigned those statuses automatically by the dialler. The other 2 statuses have been set by the agent at the end of the call, so the agent has selected “Sold” and “Call Back” for those 2 leads.

When an agent finishes their call, they select the customer status, here in their agent interface 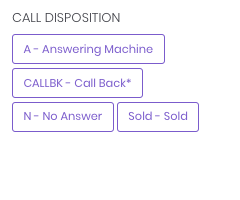 Unique customer statuses can be set in the campaigns page, specific to your campaign, for example if you are selling car insurance, you may have “Not Due For Renewal” as a custom status. These statuses feed into the reporting in Topa Dial.

Dial statuses are the statuses which are set in your campaign to dial.

They are set here in your campaign, these are the standard dial statuses.

If we go back to your list, you will see that all 5 leads are now in the “Called” column.

This means that the dialler has ran out of leads to ring. So we will “reset the list” using this reset button

Now we have reset the list, you can see in the lists screen that 3/5 leads are now “dialable leads”

And you can see here, ALL leads have returned to the “To Call” column.

Although all leads have returned to the “To Call” column, the dialler will ONLY call the statuses we have set in the campaign dial statuses. Remember we have set:

So the leads in the list with the status “Sold” and “Callback” will not be called. Of course, if you add these statuses as a dial status, you can call these leads back. For example, sometimes contact centres may wish to ring back all leads with a “not interested” status.

You can reset lists as many times as you require, and in the lists page you can see how many times each status has been attempted to be called.

Was this article helpful?